Fancy an acoustic beauty? The Gretsch G9500 Jim Dandy Flat Top Acoustic is a superb guitar that you’ll be happy to lay your callused hands on!

While it’s alright to start your guitar journey on a cheap crappy guitar, learning on a beautiful mid-range acoustic guitar that not only looks nice but also sounds fantastic can really be the spark that motivates you to move forward.

Practicing is a huge part of learning anything on the guitar. In fact, even doing a simple 4/4 strum while changing between the basic open-position chords takes a good amount of practice. It takes lots of time and effort to build the necessary muscle memory, so if you’re stuck with an instrument you don’t like, it can further slow you down.

Mid-range guitars do not cost as much as premium guitars and have decent playability as well as tone, so there’s not much to complain about. For an acoustic, the construction and build materials really affect the overall acoustics, so it’s very important that you get a decent one.

The G9500 is a pretty popular instrument among those of us just starting out, and most reviews on the net are filled with happy positive comments.

In this short Gretsch Jim Dandy review, we take a look at how the Gretsch acoustic guitar is made and see how it fares as a beginner-intermediate guitar in the medium price range. Let’s get into it!

Too lazy to read the full review? Here’s the quick summary! 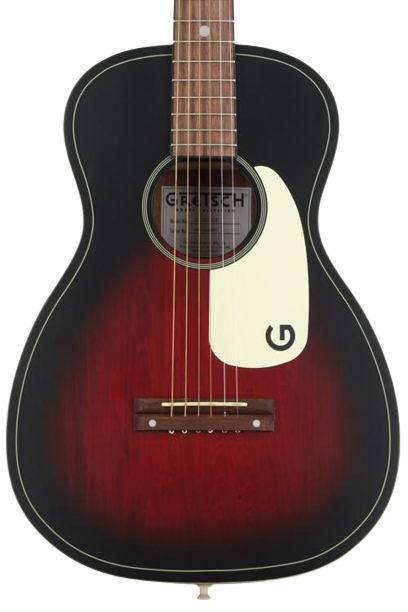 The Gretsch Jim Dandy acoustic is a versatile acoustic guitar not only suited for the clueless beginner but also for seasoned veteran players out there.

Made out of fine materials and providing excellent playability, it’s an absolute delight to hold in your hands. It’s just about perfect for anything you might want to play, and it’s great value for the price.

Are Gretsch Guitars Any Good?

So far, my experience with Gretsch guitars has been great. One of my friends used to have an old Gretsch that he’d gotten as a family heirloom and that thing was a beauty!

It played great, and when I did buy one of these for myself, I have to say- I wasn’t disappointed. The Gretsch brand is consistent with the quality of instruments they make, and every guitar they make seems to be well-made with a lot of care and effort put in.

The G9500 Jim Dandy Flat Top acoustic isn’t a full-size guitar. It is what’s called a parlor guitar with a ¾ scale.

A ¾ scale is a bit smaller than the standard 25” length between the nut of the guitar and the point on the bridge where the string remains attached.

With slightly smaller frets and a comfortable neck radius, it’s very easy to play, especially if you have small hands.

Even if you have normal hands, it doesn’t make much of a difference. It does save some space when you’re packing up or just want to de-clutter your home.

The rather portable size of this instrument also makes it an ideal instrument to gift your young ones as a serious learning instrument.

The wood used on this is a pretty decent one called Agathis, with tonal characteristics similar to basswood. It’s inexpensive but not that bad, so it’s okay.

It’s certainly not the best out there, but considering the price of the Jim Dandy Acoustic, at least it’s not plywood! A solid body top is certainly better than laminated woods when it comes to resonance and sustain but it’s a necessary sacrifice here.

Agathis is pretty cheap and resembles basswood. It is said to be not as strong and have less sustain than other tonewoods.

You can hardly expect to find top-end mahogany on this as you are paying a low price. But you’d be surprised to know that this one has got a rosewood fingerboard.

Rosewood is mostly used on instruments at the upper end of the price spectrum, and it makes the neck on the G9500 acoustic look beautiful.

I prefer bone nuts on my guitars. It’s more of an aesthetic thing really, but I find that upgrading the cheap plastic nut to a decent bone nut can make improve intonation and slightly improves the tone as well.

As far as the build is concerned, there are no obvious flaws like sharp edges or blemishes on the body of the guitar. It’s top-notch Gretsch quality and looks beautiful. 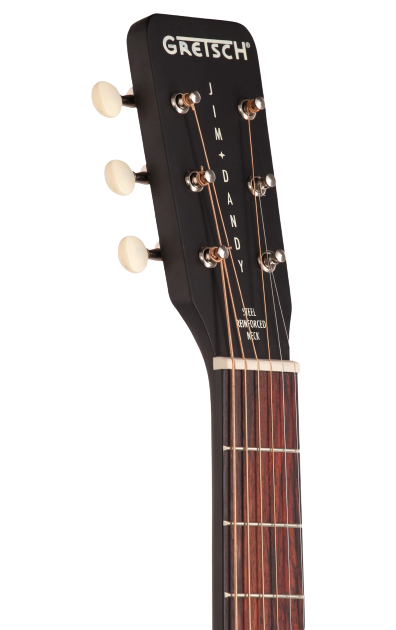 The Classic Gretsch logo atop the headstock also looks nice. The build looks and feels very sturdy which is obviously a good thing!

The Gretsch G9500 Jim Dandy acoustic doesn’t have the coolest tuning machines but the ones here work fine. These stay in tune for a reasonable period unless you’re doing bends everywhere.

In my experience, it’s more important to have tuning heads that move smoothly than some cool-looking tuners that are a pain when tuning up the strings.

The Jim Dandy Flat Top Acoustic has a comfy neck with a 12” radius, which is to say that it has a slight curve that makes fretting notes easier. 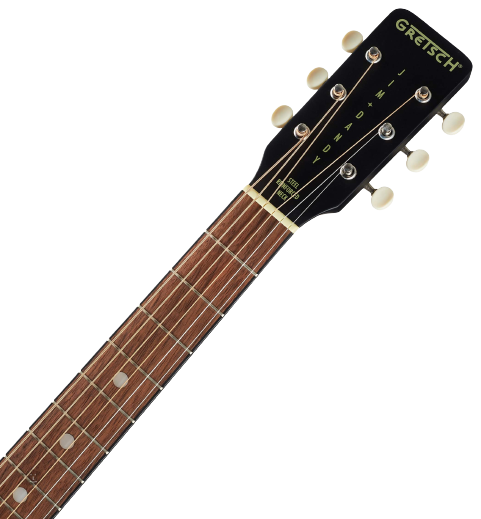 In general, it’s easier to play those tricky barres on necks with slim profiles than on a big one. The parlor form factor helps with narrower frets which mean that you’ll have an easier time fretting the strings if you’ve got small hands.

It’s also got Pearloid inlays which nicely complement the beautiful rosewood texture. The travel-sized guitar has a nato neck which is pretty good.

The neck has a truss rod inside in case the neck warps sometime in the future. You just need an Allen key to rotate the truss rod and you’re done adjusting the string action.

At first glance, the Agathis body looks like a dreadnought but it’s a slimmer elegant version of that.

The lack of a cutaway above the soundhole gives the Jim Dandy acoustic a distinctive appearance.

I kind of like how it looks. When I think of an acoustic, I really don’t think about playing sixteenths above the twelfth fret, so it’s absolutely okay to not have a cutaway there.

The simple aesthetics of this acoustic guitar are a defining touch to the design. The Jim Dandy flat top is beautiful and it feels more like a travel guitar.

As for the bracing, it’s got X-bracing. If you are new to the term, it just means that the top has two X-shaped pieces of wood glued underneath that give strength to the top.

There’s actually much more involved than that, but it’s okay to just think of it as something that will actually keep the ball ends in place, and prevent the top from collapsing.

Just like the choice of wood and strings, the bracing also affects the sound. X-bracing on this particular guitar produces a bright resonant sound.

The bridge on this is also a rosewood one just like on the higher-end guitars, which, as you might already know that I’m a huge fan of. The rosewood bridge is quite sturdy and the select guitar woods make it a great guitar!

Another interesting thing about the bridge on this is that unlike the bridges found on most guitars, Jim Dandy Flat Top Acoustic has the ball ends of strings tied on the bridge instead of tucked under the bridge.

This doesn’t do much for the acoustics but certainly gives off a classy vibe. The pickguard with Gretsch lettering on it has a neutral shade and makes the body look really elegant.

To be honest, the thing I like most about Gretsch acoustic guitars is the smooth humble pickguards

When you place the Gretsch G9500 on your lap, the first thing you’ll notice is the matty finish that helps you play for longer hours. The glossy neck tends to get sticky during practice time, so I prefer to stay away from gloss ones in general.

Generally, I would prefer full-size acoustic guitars to parlor-size guitars with x bracing but in this case, I prefer the Jim Dandy acoustic despite it being a short-scale guitar.

How does it sound?

It’s not just the wood and construction that play their part in making or breaking the sound of an acoustic guitar but also the strings. A cheap crappy set of strings can make even the most excellent acoustic instrument played by an expert sound like a dying cat.

It’s an inexpensive guitar but doesn’t sound like a cheap guitar at all.

Gretsch includes a 12 gauge D’Addario string set right off the bat which is fine for beginners and most intermediates. It’s actually okay for pros too- as this thickness of strings lends well to fingerstyle and blues, and has a fairly fat tone.

I do a lot of string bending and string note runs, and prefer to be able to play fast passages, and lighter string gauges just react better to my fingers. So, I would swap the stock strings out for an inexpensive set of lighter strings, but you don’t necessarily have to.

It’s a well-made acoustic guitar, so of course- it sounds great for casual strumming and campfire gigs. It’s also good for anything from folk to delta blues and bluegrass, so you don’t have to worry about not being able to play something on this.

I like experimenting with percussive sounds on my acoustic guitar. The Jim Dandy acoustic has a crisp bass and sharp top notes which makes it an ideal guitar for learning and performing percussive fingerstyle as well.

If there’s one thing I don’t like about mid-range acoustics, it’s that these don’t always come set up properly. As a lead player, I tend to play single-note lines a lot, and sounding off-tune can kill the motivation to pick up the guitar.

Gretsch G9500 is a broke beginner’s dream guitar in being affordable with excellent playability and tone.

The aesthetics and construction are on point, and I’m not even lying when I say that this is one of my favorites among mid-range acoustic guitars (mostly because one of my friends used to own this, and also because I absolutely love Gretsch guitars!)

It even has rosewood frets which just look beautiful.

The Jim Dandy acoustic is great for the price point, but don’t take my word for it. You can check reviews on any site, and I assure you- most reviews are positive from happy buyers.

Are the stock strings good?

The stock ones are gauge 12 D’Addario ones, so they’re pretty good and sound nice.

There’s no need to change strings unless they’re breaking or rusty unless you’re playing for gigs or have a preferred set of strings.

Will I need to upgrade to a more expensive guitar soon after I buy a mid-range one?

A mid-range like the Gretsch Jim Dandy acoustic is a great investment for anybody. It’s well set up and has excellent playability, so you don’t have to worry about upgrading any time soon.

It works for percussive strumming as well as Spanish-style playing too. The only reason I can think of for upgrading to another guitar is if you are trying to learn tapping or shredding or legato, for which an electric guitar is better suited anyway.

Buying stuff for cheap is always risky business- let alone musical instruments. I’ve found that most beginners want to get the cheapest and best acoustic guitars under $200 (which is frankly a reasonable budget for most people just starting out), but more often than not- they end up with an instrument they won’t like in…

Mastering the guitar can be a long process that requires consistency and regular practice on your part. You do get to play songs for your buddies and impress your girlfriend in the process, but you have to consider the fact that if you want to take your playing to the next level, you should also…