If you’re a beginner, you may have heard somebody talking about the pentatonic scales. The minor pentatonic scale is the bread and butter of any rock guitarist’s repertoire – and because it’s easy to learn, it’s also perfect for getting your hands dirty as the very first scale you’ll learn.

Guitar scales have a bad reputation around them – while they are certainly crucial to any musician’s ability to improvise and compose awesome melodies, guitarists often think of them as box shapes. Hours of practicing scales can also take lots of effort, but we don’t think it has to be boring.

In this short post, we talk all about the pentatonic minor scales, including the theory involved (you’ll need it), basic shapes to glide around the fretboard, and how to actually use it in a song. We’ve also shared some insights as to how you can break out of the boxes and approach the guitar fretboard as an artist, so stick around to the end to find out more!

Before We Get Started – What Does A Scale Even Mean!

The thing is- not every note (out of the 12 notes) sounds good with another note. Scales are basically just a bunch of notes that sound good together. Think of it like a group of friends – there may be hundreds of students in a University but only some of them will form a close group. Just like how students have several close-knit groups, there are also many scales in music.

The reason why you’ll need to learn scales is that a particular scale sounds and feels a certain way. The Phrygian scale sounds exotic and something out of an Egyptian documentary, the minor scale sounds sad, the major scale sounds happy, Dorian sounds bluesy, and Lydian sounds magical! How you perceive the scale sounds does vary but there’s no denying that learning the scales offers a huge boost to your vocabulary.

What Is The Pentatonic Scale?

Like I said earlier, the minor scale sounds a bit sad and the major scale sounds like a happier cousin. The minor pentatonic scale has dug its way deep into rock music and is the most widely used scale in any musician’s toolbox. We recommend picking one and learning to recognize the sound first, before learning the other scale.

If you’re in the key of C and you want to play the C minor pentatonic scale, this is what it would look like:

You can see that the minor pentatonic is just the minor scale without the second and sixth degrees. The beauty of the pentatonic scale is that you can get many different scales and modes by just adding a note or two to the five notes in the scale.  Master the pentatonic minor scale properly, and you can easily play rock solos after some practice!

The major pentatonic scale is the happier, calmer version of the minor pentatonic scale, and you can find it in many Chinese movie soundtracks and children’s songs. That’s not to say it cannot be used widely- sure you can.

Tips For Learning The Pentatonic Scales 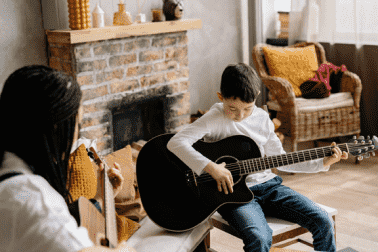 These scale patterns can seem very intimidating, and just like learning your intervals properly – it’s crucial that you internalize these shapes so you can use them while improvising. These ‘box’ shapes will get you up and running if you have never heard about scales till today. 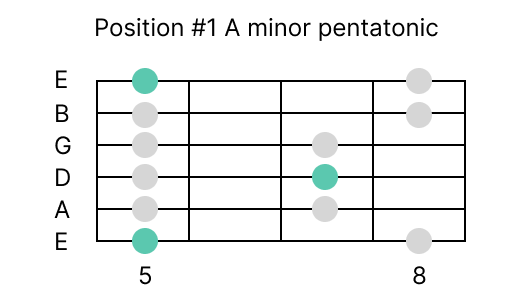 Just follow the box shape and make sure that you’re trying to play a fret with a certain finger – you would play the fifth, sixth, seventh, and eighth frets with your index, middle, ring, and pinkie fingers respectively. This is to help you build speed later on when you want to learn the 3 note-per-string scale patterns. 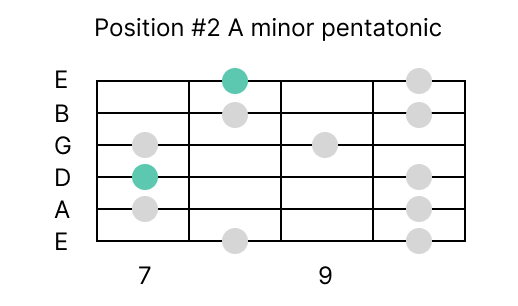 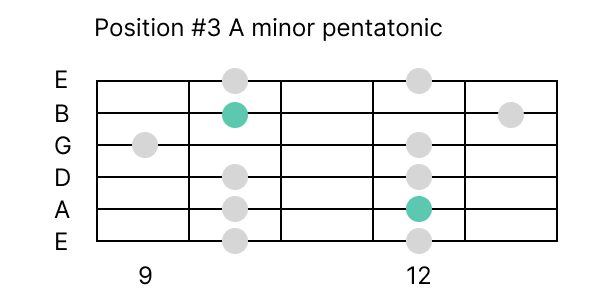 The third position of A minor pentatonic starts on the tenth fret. This is probably the trickiest of the box shapes for you – just keep practicing on the top 3 strings and you’ll get it quickly. 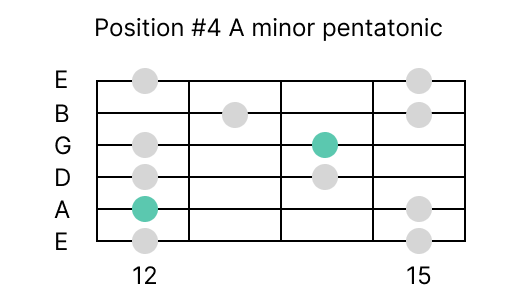 Starting on the E note on the sixth string twelfth fret, the fourth position is the sweet spot. It’s just within reach and feels super nice to slide into when you’re trying to play an awesome solo on an electric.

This is the final shape for the minor pentatonic scale- though we have shown you how you would play this up on the fifteenth fret, you can also play this scale down starting at the 3rd fret. 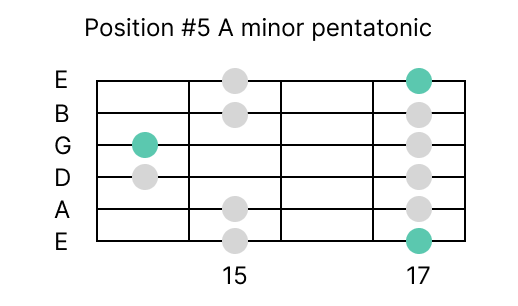 Once you’ve practiced every single one of these shapes, you can also begin to see a pattern throughout the neck. Just pull up your favorite background in the key of A and rock out to this extended scale shape:

What is the formula for the pentatonic minor scale?

What can you do with the minor pentatonic scale?

What are the types of pentatonic scales?

Penta just means five, and as long as you’ve got five notes on a scale, you can call it pentatonic. But the ones that are most commonly used are the pentatonic major and pentatonic minor. Both of these scales have five notes and are derived from the major and minor scales respectively.

Hopefully, now you have a very good idea of how to learn minor pentatonic scales on the guitar and are ready to improvise your own parts. It does take lots of time and practice, so we recommend taking your time with it. Also, you won’t memorize the above shapes straight away – approach a single position, try playing something within it, and think of the shapes more as a reference rather than trying to memorize all 5 of these in a day.

Once you master the pentatonic scale, you can try to incorporate more notes into your playing and get into advanced things like major/minor scales and modes to add variety to your playing.

Learning things like intervals, scales and learning to read EQ charts can really help a lot in the long term. 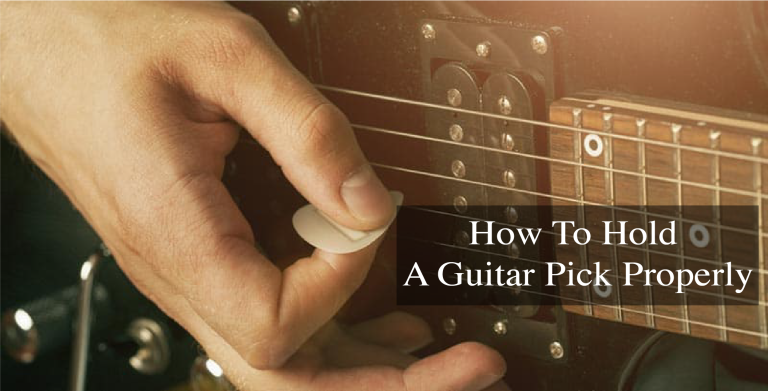 You may have wondered how to hold a pick so you don’t seem like a beginner to somebody watching. Truth is, holding a pick, like any other technique, is a personal thing. If you feel comfortable doing it with the way you hold it and can do it for hours without feeling discomfort in your… Learning to read and use an instrument frequency chart is super important if you want to use EQ controls to mix and master music. This EQ cheat sheet will get you up to speed on where various instruments lie on the frequency spectrum and might clash in the mix. Much like how mastering the pentatonic… 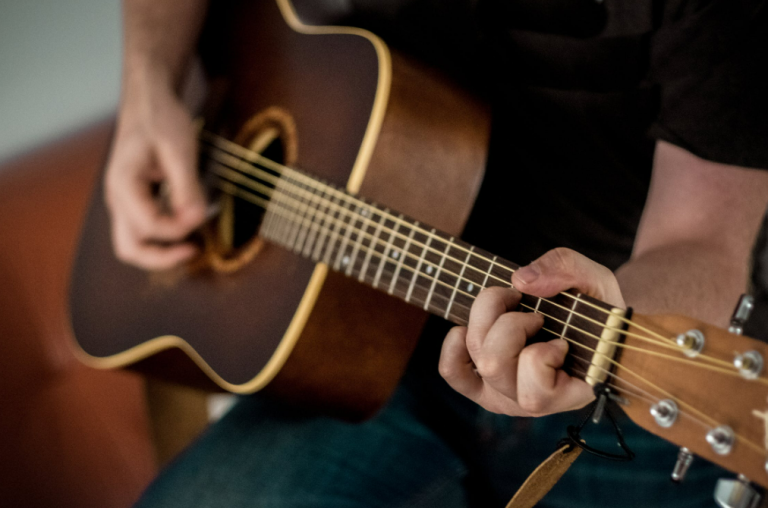 You may or may not have realized this just yet, but every single guitarist out there wants to play super fast licks. They all want to play clean, with precision, and with an excellent sense of dynamics and tone. The problem is, there can only be one Buckethead in a sea of mediocre players. So… 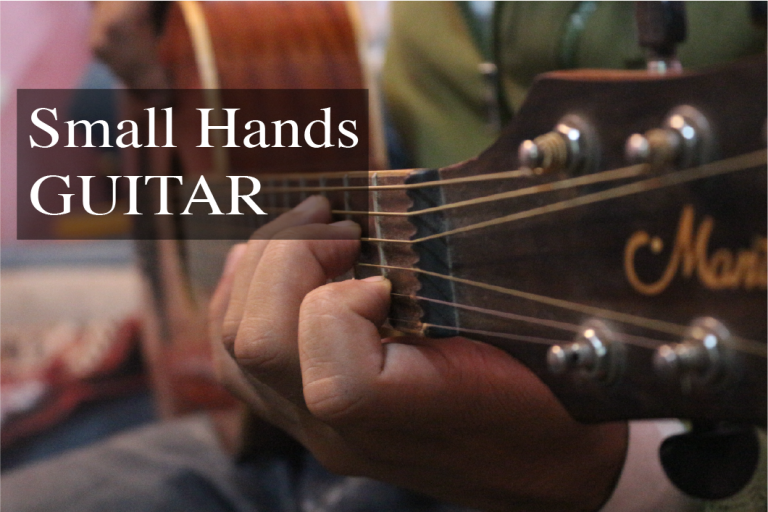 If you are a beginner, you may have found it hard to find the best guitar for small hands. Do you go with a shorter scale guitar or is there some ideal beginner guitar that will be just right for you? Most guitars out in the market are catered to right-handed players who have fairly… Is electric guitar better than acoustic? Or easier, perhaps? I’ve come across this several times in my years of learning and teaching the instrument. Much confusion seems to have stemmed from the fact that most players start out with an acoustic and later learn the electric guitar. It’s actually so common that some guitar teachers… Looking for easy bass songs to learn? We’ve got just the right ones for you! If you are a beginner, you may be intimidated by other bassists who can slap like a beast and have incredible repertoires. Everybody started somewhere, so you just need to learn your pentatonic scales and first bass songs to progress…